Steve has been a Realtor in Whitefish since 1992 after a successful career in the reforestation business.  He has earned many honors and awards as a top producer during that time both at RE/MAX and previous companies.  Steve has devoted his working time to furthering his knowledge and experience of the Montana real estate market as evidenced by his status as a Broker and attaining a degree from GRI. Steve practices real estate as an advocate for his clients, putting their needs first with attention to detail and a determination in negotiating their position.

Steve has raised three great children during his time in Whitefish and has been active in the local community with a special affinity for coaching youth sports. Of course, some time is set aside to enjoy the wonders of the Flathead whether skiing on the Big Mountain, golfing on one of many local championship courses, boating on Whitefish Lake, biking or hiking on the WF Trail, or slipping into Glacier Park.  Steve and his family have enjoyed Whitefish and the Flathead Valley for over 35 years.

Steve has often been heard saying, “Whitefish has grown over the years, but we still have the same solid community that we have always had.” 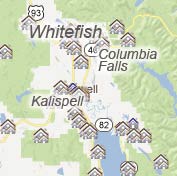